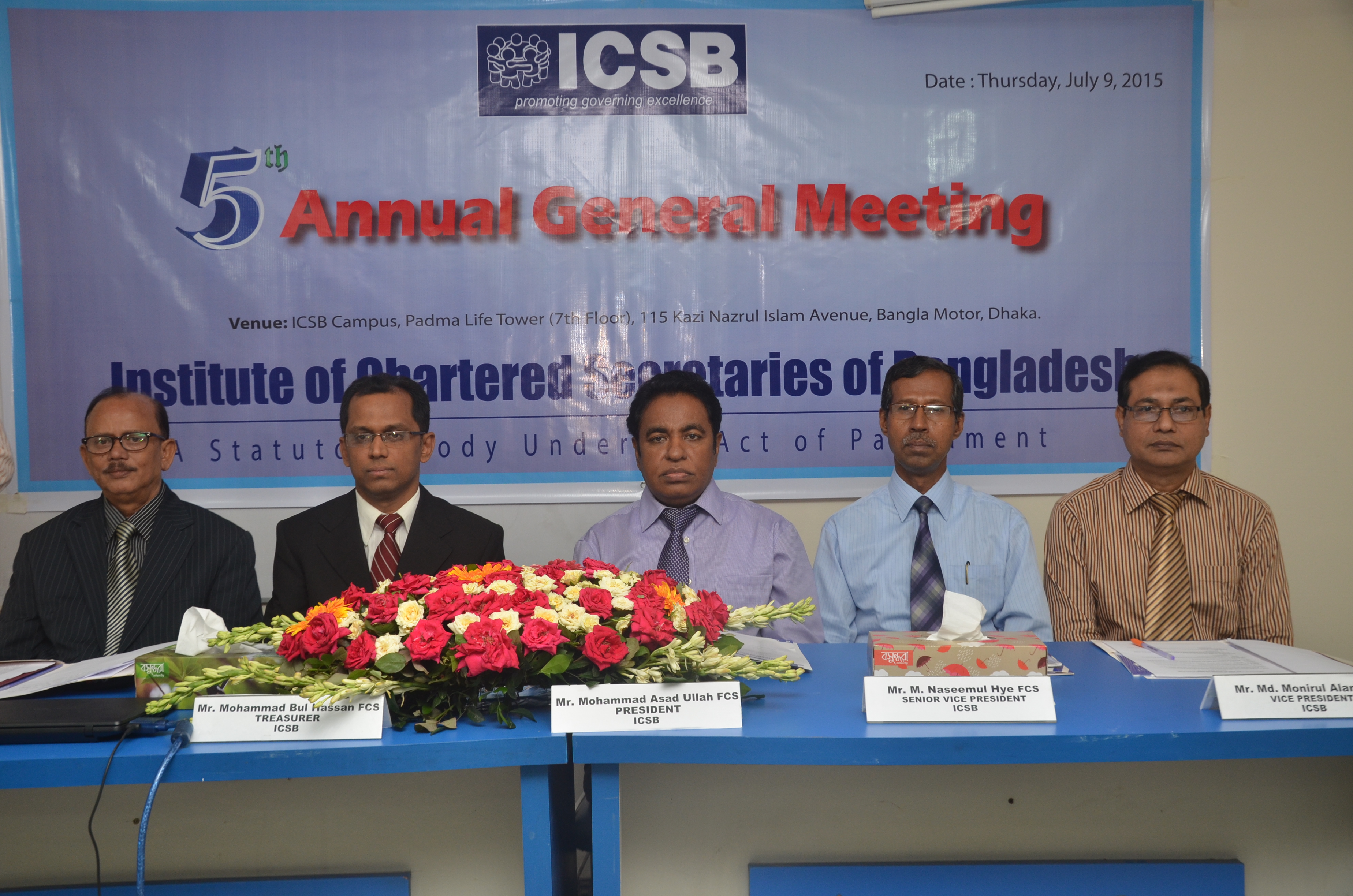 The 5th Annual General Meeting of the Institute of Chartered Secretaries of Bangladesh (ICSB) was held on Thursday, July 9, 2015, at ICSB , Padma Life Tower (7th Floor) 115, Kazi Nazrul Islam Avenue, Bangla Motor, Dhaka. The Meeting was chaired by the President of the Institute Mohammad Asad Ullah FCS. The President in his address tabled the Council Report of 2014 featuring remarkable achievements for the Institute. He highlighted on taking some initiatives for arranging adequate fund from the Government for the development activities of the Institute. He also mentioned about successfully holding of ICSB National Award for Corporate Governance Excellence-2013on December 4, 2014 wherein Hon’ble Finance Minister Mr. A.M.A Muhith MP graced as Chief Guest and 15 listed Companies were awarded for the successful accomplishment of Corporate Governance structure in their respective Companies. The President declared that this year also ICSB National Award of Corporate Governance Excellence -2014 shall be held with due grandeur sometime in last quarter of the year and this will be an annual event of ICSB. Besides, ICSB also successfully held 5th National Convention and Convocation 2014 wherein Hon’ble Commerce Minister Mr. Tofail Ahmed MP and former Commerce Secretary & former Chairman, Bangladesh Securities and Exchange Commission, Mr. Faruq Ahmad Siddiqi remained as Chief Guests respectively. He disclosed that comprehensive proposal has been sent to the Ministry of Commerce for inclusion in the new Company Act. He further disclosed that Members Group Insurance Coverage has been implemented and ICSB Members Benevolent Fund has also been established with the Deed of Trust duly registered in the Sub- Registrar Office, Dhaka. He urged upon the Members to contribute generously for Benevolent Fund so that major steps can be taken for the welfare of the Members. He also mentioned about the initiative taken by the Institute for constructing a state-of-the art campus-cum-commercial complex at the purchased land at Aftab Nagar with Government’s assistances.

The President in his report also highlighted on having more CPD Programs for professional development and ensuring state-of-the art service to the students for academic pursuit. He further mentioned that ICSB website has been upgraded and more official works have been brought under IT enabled services to serve Members better.

A large number of members present in the meeting highly appreciated the performance of the Institute, and congratulated the Council for working successfully. They also put their valuable suggestions towards the development of the Institute. The Annual General Meeting was followed by a Doa-Mahfil and Iftar. 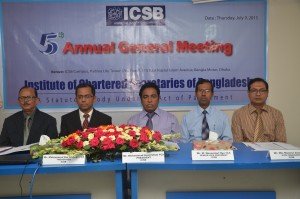