In his welcome speech Md. Monirul Alam FCS, Vice President of the Institute and Chairman of the Members Welfare & Recreation Sub Committee appreciated the Members who took part in this programme in their busy schedule. He also thanked all concerned for making the programme successful. 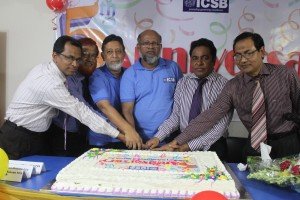 The President Mohammad Asad Ullah FCS, in his speech outlined on the various activities taken by the Institute during the last 5 years and recalled the timeless efforts and hardships that the Founding Members and himself went through to pursue with the Government of Bangladesh in passing the enactment of the Chartered secretaries Act 2010 and establishment of ICSB. He specially expressed his thanks and gratitude to the honorary Fellow Members including the then Honorable Commerce Minister Mr. Muhammad Faruk Khan MP in the enactment process of the law and gazette notification of the chartered Secretaries Regulations 2011. The President urged upon the Members to be more cooperative and responsive in establishing the Institute as an icon for professional skill development and corporate governance. He also highlighted that the Institute needs to gain pace through its younger generation of Members.

The President concluded his speech expressing his hope that the new Chartered Secretaries will have a greater role in the development of the Institute in future. 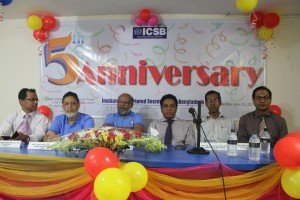 The anniversary program was marked with Cake cutting, reminiscence from Members, followed by an enthralling cultural programme and ended up with Gala Dinner.

Published in The Financial Express Newspapers, click the following link…..