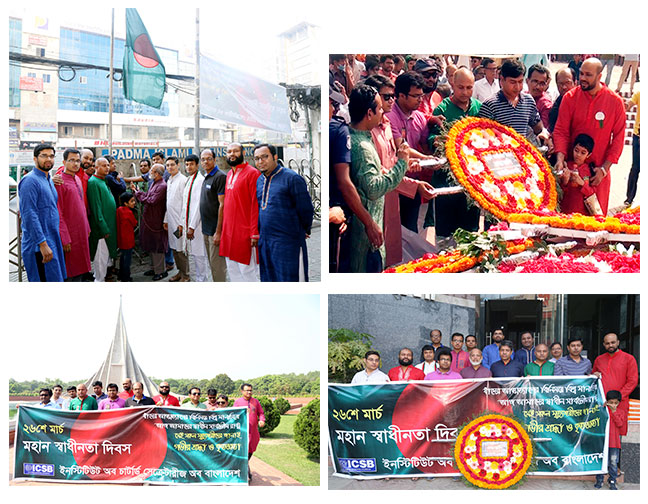 ICSB CELEBRATED THE 49TH INDEPENDENCE AND NATIONAL DAY OF BANGLADESH

A team of ICSB Members and Ofﬁcials paid tributes to the Liberation War Martyrs’ on Tuesday, March 26, 2019, the 49th Independence and National Day of Bangladesh which is marked as a commendable and dignified day in the history of Bangladesh. On behalf of the Institute, Dhaka Regional Chapter Sub Committee organized the programme under the supervision of its Chairman, Mr. Syed Moniruzzaman FCS.

The day’s programmes were began with the ceremonial hoisting of Bangladesh’s red and green national flag by Mr. Md. Selim Reza FCS, Vice President of the Institute at the ICSB premise. Everybody present at the programme sang the Bangladesh national anthem at the time of flag raising. After that Members reached Jatiyo Smriti Soudho (National Martyrs’ Memorial) at Savar to pay ﬂoral tributes in remembrance of the souls who sacriﬁced their lives to earn Bangladesh liberation. After paying their tributes, they stood in solemn silence for some time as a mark of profound respect to the memories of the martyrs of the 1971 Liberation War.

Among others, Mr. A.K.M. Mushfiqur Rahman FCS and Mr. Selim Ahmed FCS, Council Members of the Institute were present in the programme. 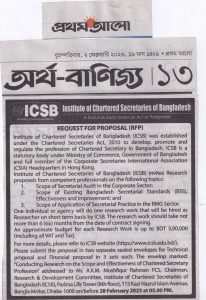