Institute of Chartered Secretaries of Bangladesh (ICSB) has organized a Continuing Professional Development (CPD) Program on “The Finance Act-2015” on Thursday, July 30, 2015 at the Institute Premises at Padma Life Tower (7th Floor) 115 Kazi Nazrul Islam Avenue, Bangla Motor, Dhaka-1000. A large number of Members of ICSB participated in this programme.

Mr. Das in his presentation highlighted on the major features of the “The Finance Act-2015” that includes changes in Income Tax Ordinance, 1984 such as individual tax rate, re-structure in the slab of wealth for imposing surcharge on individual tax payers, basic salary and bonus received by Govt. employees as well as the insertion of two new sections: prosecution punishment for submitting fake audit report, punishment for unauthorized employment of foreign nationals.

Mohammad Asad Ullah FCS, the President of the Institute shared views on the keynote presentation and also discussed on various aspects of “The Finance Act-2015”. He highly appreciated the Institute for arranging such a timely important workshop for the development of its members.

Thereafter qualitative and fruitful discussions were held during a question-answer session between the participating Members of the Institute and the Keynote Presenter. Mohammad Sanaullah FCS, as Session Chairman moderated and summed up the whole session.

The programme concluded with a vote of thanks by khalid Mohammad sharif ACS, Member Secretary Professional Development Sub Committee on behalf of ICSB. 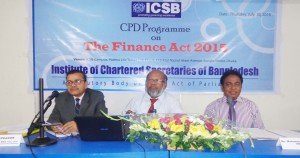