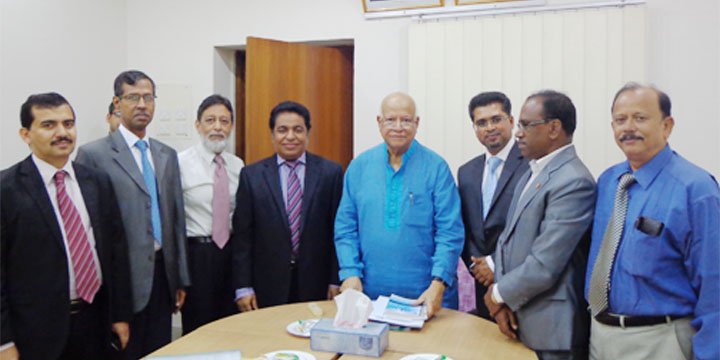 Mohammad Asad Ullah FCS, President of Institute of Chartered Secretaries of Bangladesh (ICSB) along with the some of his elected Council Members met with Honorable Finance Minister, Abul Maal Abdul Muhith today at his meeting room at Economic Relations Division (ERD) Sher-e-Bangla Nagar, Dhaka. The President introduced his Council Members to Honorable Finance Minister and highlighted on different initiatives undertaken by ICSB since its inception. He expressed his sincerest thanks and gratitude to the Government of Sheikh Hasina for passing the Chartered Secretaries Act -2010 that gave ICSB a legal footing as the recognized professional body under Ministry of Commerce for the development and enhancement of corporate governance in the corporate sector of the country. The President also briefed the Hon’ble Minister about the introduction of Corporate Governance Award-2013 by ICSB during its 5th National Convention Program to be held on December 04, 2014 and invited him to be the chief guest on the occasion, to which the Honorable Finance Minister give his consent.

The President also highlighted on the professional Course (Chartered Secretaries Course) offered by the Institute in line with UK, India and other developed countries of the world in order to equip the professionals with adequate skills for getting employment both home and abroad.

The Council Members thanked the Hon’ble Minister for giving his valuable time and hoped that his continued support and guidance will help the Institute to move forward to achieve its objectives.

The news has been published in The Financial Express.  To read the news, click following link…..