Amid patriotic zeal and enthusiasm, the 46th anniversary of the great Victory Day was celebrated at the Institute of Chartered Secretaries of Bangladesh (ICSB) on Saturday with a renewed pledge to build ‘Golden Bangla’ imbued with the spirit of the War of Liberation.

The celebration began with the recitation from the Holy Quran and then playing of the national anthem in the Institute premises. Freedom Fighter Engineer Rejaul Karim Chowdhury, one of the Founders of the Shadhin Bangla Betar Kendra graced the occasion as the Chief Guest while President of ICSB, Mohammad Sanaullah FCS   chaired the programme.

An art competition and poetry recitation on the War of Liberation were also organized where a good number of children of ICSB Members participated.

The Chief Guest in his speech described his personal account of the crucial days that he passed during the Liberation War of Bangladesh. He also described how the Pakistan launched the illogical war, and swooped on the helpless and innocent people of Bangladesh. 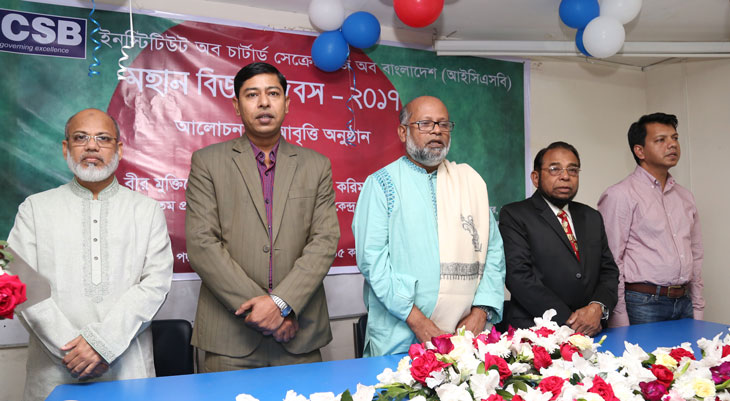 Mohammad Sanaullah FCS, President of ICSB in his speech mentioned that the Liberation War is the most crucial event in the life of the Bengalis. It is a both glorious and tragic chapter of history – glorious as we achieved independence and tragic as we lost over three million lives of our brothers and sisters.

Among others, Council Members  Mohammad Asad Ullah FCS,   Md. Shahid Farooqui FCS, Salim Ahmed FCS, were participated in the discussion session and N G Chakraborty FCS former Councilor and Syed Moniruzzaman FCS, Chairman, Dhaka Regional Chapter Sub Committee were also spoke on the occasion.  A good number of Members, Qualified Chartered Secretaries (QCS) and students along with their spouses and kids were present in the programme.

The day’s program concluded with a special prayer seeking divine blessings for salvation of the departed souls of the nation’s valiant freedom fighters who sacrificed their lives for the liberation of Bangladesh from the occupation force of Pakistan in 1971.